skip to main | skip to sidebar

Tambourelli came home to Newton Stewart this year with the 2018 World Tambourelli Championships beinRepresentatives from Newton Stewart and the surrounding area faced fierce competition from players based in Glasgow, Edinburgh, London, Oxford, Yorkshire and Devon as well as Sweden, Japan and the usual strong contingent from Germany.g hosted at the Merrick Leisure Centre on the 28th and 29th of July. 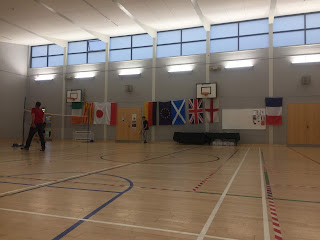 In the Men’s Singles event, defending champion and Newton Stewart native Bazil Hughes was unable to earn his 5th title as he came up against the unstoppable force of Sebastian Rose in the final. Sebastian, 4-time German champion and now 2-time World champion, went through the tournament in dominant fashion, not dropping a single game and winning the final 21-15, 21-12.
Bazil, 26, said “Sebastian was too good this year - I gave it everything I had but he was on another level. When I played him in 2013 and 2016 I found a way to win but this time he had an answer for everything I threw at him.”
“I’ll have to go back to the drawing board and come up with something new because Sebastian has raised the bar. It felt like I was playing against two of him - nobody has beaten me by that wide a margin since I was 15 years old.”
In the Women’s Singles, Jasemine Bosenick from Oxford claimed her 3rd title, defeating last year’s champion Katrin Ueberfuhr of Dresden by 2 games to 0. Katrin defeated the 10-time champion and all-time great Indy Lennartsson in a gruelling three-game semi-final matchup but was unable to overcome Jasemine in the final.
In the Doubles Graham Moffat and Jason Littlefield took home the title, beating Indy Lennartsson and Lutz Reifer by 2 games to 1. Graham’s victory ensured that, for the 19th consecutive year, Scotland had an adult tambourelli world champion.
Under 16s doubles was a tight game with high skills from the youngsters employing a lot of the tactics available including fake shots as well as alternating long and short shots. Vanessa and Willie got ahead to create a Scottish and German victory.
In the newly-added Singles category for 16-21 year-olds, Fraser Dawson faced Tal Appleton-Wickens in a repeat of the 2013 under-16s final. Last time around Tal, 21, from London was the victor, but this time Fraser, 18, overcame his rival to claim another title for Scotland on home turf.
Next year the tournament will take place in Sweden for the first time. Chloe Bruce, a former world champion, hopes the tournament will bring more players to the weekly club in Newton Stewart: “We need all the help we can get for next year if we’re going to keep the streak alive and bring back a title to Scotland for the 20th year in a row. We also thank the sponsors 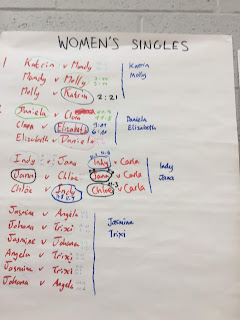 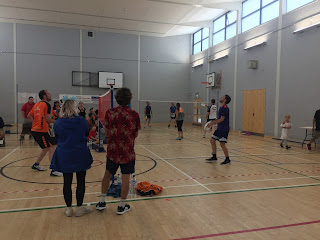 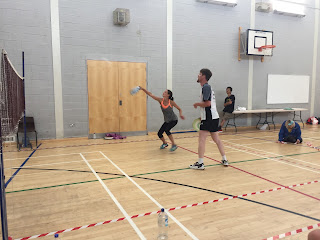 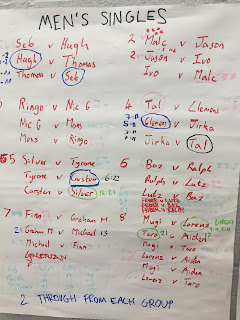 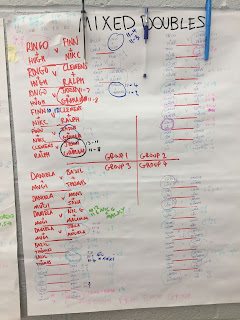 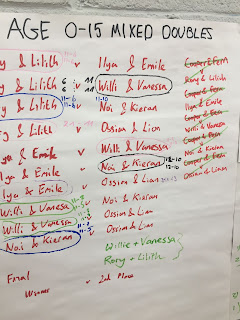 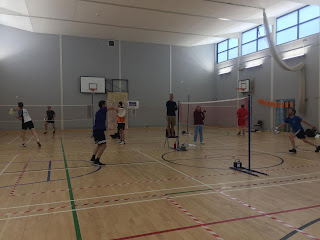 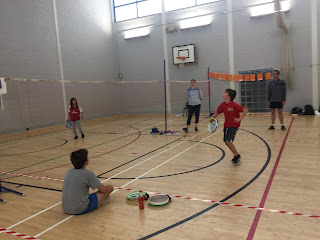 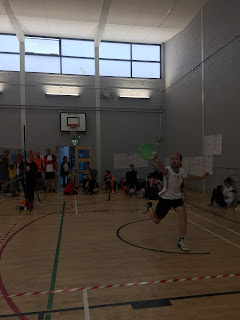 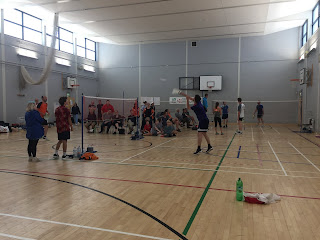 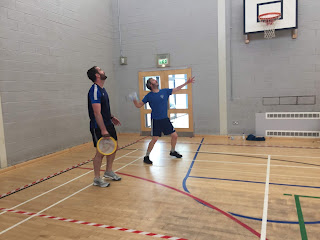 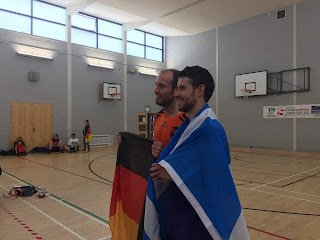 Posted by Scottish Tambourelli at 16:10 No comments: 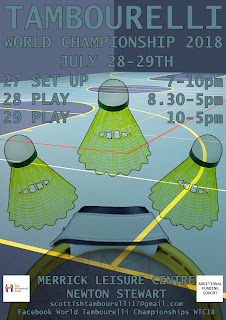 Good news with funding support.
Thanks to Holywood trust and Wigtown Community Shop .
We're still waiting to hear from Port William Community shop, Aldi Sports fund and Penkiln Sawmill.
We need to make more banners and some trophy bases so are planning a workshop.

Posted by Scottish Tambourelli at 05:02 No comments:

World Tambourelli Championships 2018
Tambourelli is a sport that was developed in Newton Stewart, Scotland in the 1970s. It's a racquet sport played with a shuttle cock that can be played indoors or outside. Over the years it has been taken to schools, festivals, clubs and tournaments all over the world. Scottish Tambourelli have been awarded the honor of hosting the 2018 World Tambourelli Championships (WTC18) for the first time since 2015. The tournament will feature men's, women's and various children's singles and doubles competitions. 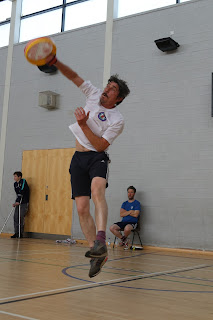 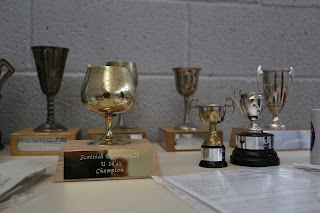 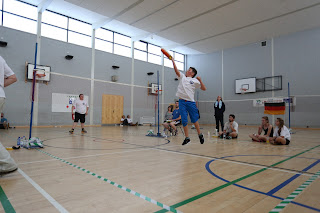 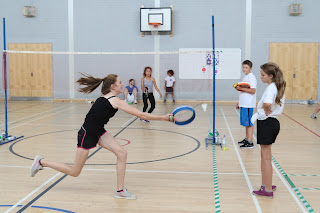 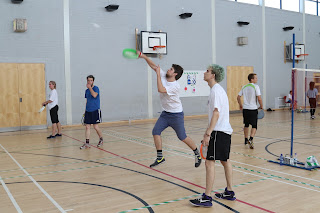 It will run every week until the Championships at the end of July.

The Championship are open to everyone. We encourage anyone who's interested to come along and enter, regardless of experience or fitness level. Lots of games are played in a round-robin group stage and the mixed doubles tournament features random pairings, so you never know how far you'll get. And in the weekly club sessions you'll find experienced players honing their skills as well as newcomers learning the ropes, so there's always a place for you no matter how seriously you want to take it. The current Men's Singles World Champion - Bazil Hughes (a Newton Stewart native) - says half the fun is just in being a part of different community: "Some of my favorite tournaments were ones where I went out early so I got to take part in more of the social side of things. Of course winning is great - I'll be going for my 5th title this year and that's the main focus for me - but whatever happens on the court it's an event I'd recommend to anyone. How often do you get to hang out with a load of new people from all over the world?"

The Under 16s WTC has 3 age groups : 9s and under - mixed only, aged 10-12 and 13-15 with boys and girls classes as well as the mixed doubles for each class. Partners are randomly picked to encourage new friendships.
The Championships are open to spectators. Final games will be watched by all entrants if the players are happy with an audience.
The date is 28/29th July, the last weekend of the month.
There will be catering options provided throughout, and a prize giving event after food on Sunday night. There will be an as-yet undecided opening ceremony.
The Championship details will be available through local media and posters, Tambourelli clubs, schools, and online through Facebook, Blogspot and Wikipedia.
Posted by Scottish Tambourelli at 11:30 No comments:

Tambourelli Starts on Tuesday nights 6- 7.30pm Merrick Games Hall ,Newton Stewart
This tuesday, 23rd January, T shirts to be won in a knockout competition, with other prizes too.
Open to all comers, any ability welcome. £3 entry. 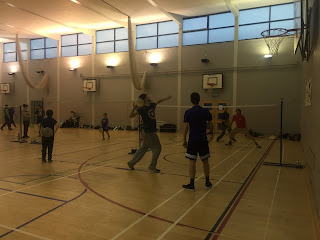 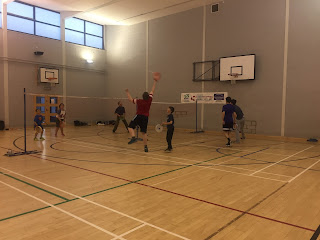 Posted by Scottish Tambourelli at 14:13 No comments:

Scottish Tambourelli
Tambourelli is a fun and inclusive game played on small courts (10m by 4m) that needs a badminton shuttle a net and 2 bats to play. The aim of the game is simply to get 21 points before your opponent does, and can be played and enjoyed straight away with 2 or 4 people of any ability. Points are scored by trying to get the shuttle to land on the ground in the opposite court. Tambourelli has been played in the Galloway for many years. Recently children, especially in the Machars, have had chances to play through After school and Active school sessions. These aim to promote Tambourelli as a way to keep fit and have fun.